On Saturday, February 16th, 2012, the Third Annual Bully Ball was held at the elegant 103 West, a Buckhead Life venue. 250 guests gathered to show their support to help raise money for English Bulldog Rescue. Former NFL Coach Dan Reeves of Atlanta served as Honorary Chair. During the PreFunction which was sponsored by Royal Canin Pet Nutrition, guests mingled among the auction items while enjoying Bulldog London Dry Gin.  During dinner, guests enjoyed Fried Lobster Tail and Petite Filet Mignon with wine donated by Georgia Crown Distributing. After dinner, guests enjoyed gambling in the casino as well as bidding on the silent auction items.

Live auction bidding began with a rowdy crowd that enjoyed the many wonderful items that were generously donated for the event.  While Joe Durham and Associates of Albany, Georgia handled the bidding, a surprise guest decided to show up. Hairy Dawg drove all the way from Athens to help encourage the crowd to bid for his fellow bulldog friends in need.  Some of the items included trips to Mexico and The Little Nell, a gorgeous bronze sculpture of a bulldog, a chef’s table at Cabernet Steakhouse, a TOTO toilet,  and tea with Barbara Dooley.

A special highlight of the night was a painting created by Scrappy, one of the GEBR rescues, who personally presented his painting in hopes of using the proceeds for his skin treatments at UGA. His painting sold for $2,100.00 to Mr. and Mrs. Marty Melson of Atlanta.  The high bid for the night was for the Oakmont Country Club Golf Trip for 7 with former Atlanta Falcons, Bill Fralic, which sold for $16,000.00.

The Bully Ball had several four legged guests attending to show their support of the event. General, The Citadel Bulldog Mascot, attended for his third year in a row, while Bully XX, the Mississippi State Bulldog Mascot, drove two states over to show his support for his fellow breed. A special thank you to UGA, MSU, and The Citadel for allowing their mascots to attend.  By the end of the night, around $90,000 was raised to help medically neglected bulldogs get a second chance at life. A special thank you goes out to attendees, sponsors, and  donors of the 2012 event.

Thank you for helping us reach our goal and helping us make a difference in the life of a suffering bulldog. 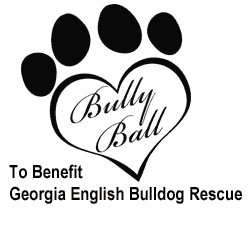