The Bully Behind the Ball

Many of you may not know that my introduction into Bulldog Rescue was a quick trip to rescue an English Bulldog mix from the Humane Society in South Carolina. I rescued Butchie for Adoptabull Rescue in Florida a few days before Christmas in 2007, kept him a week then transported him to Florida. My role in his rescue was very limited, I was the babysitter during the holidays, then the transporter to his “real” rescue. BUT…..I got the bug!

Three months later, I stumbled upon a craigslist posting for a female English Bulldog, Lola. After contacting the owners, I agreed to meet them at a gas station in Buford, GA…pretty sketchy, I know. I suspected that “Lola” had been stolen from her loving family and was being sold to the highest bidder. I went to the meeting prepared to pay the requested $300. After meeting their demands, they opened the door of the SUV, out jumped a bulldog directly into my arms. She was anxious to get away from her “owners”. I like to believe that she instinctively knew I was there to save her. She was very overweight, her skin and ears were infected. I immediately took her to my vet to check for a microchip… there was none. We began treating her infections and making her feel safe for probably the first time in a long time.

Chloe, her diva name, was the sweetest girl who worked her magic on all she met. Even my neighbors got involved in caring for her. After several months of rehabilitation at my home, we transferred her to Adoptabull Rescue, as it appeared that her ears needed much more attention than I could handle as a private rescuer. I didn’t have the network of veterinary help that we now have for GEBR. 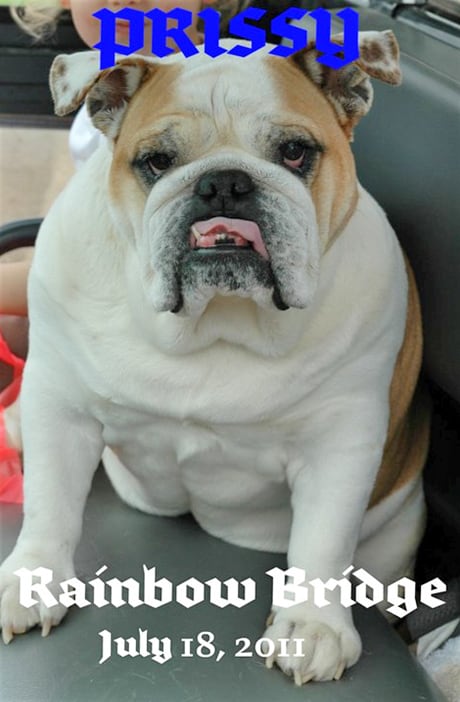 Chloe, (Princess Fatty at Adoptabull Rescue,) flourished in their care.  She was on a weight reduction program and received treatment for the chronic ear problems. Within 2 months, Princess Fatty was adopted into the most wonderful furever home any bulldog could ask for….Kelley Hollowell (Founder of The Bully Ball). For the next three years “Prissy” (her forever name) was pampered, doted on, spoiled and received the best of EVERYTHING.

In 2011, Prissy had been plagued with respiratory problems. What was initially thought to be pneumonia, did not respond to antibiotics. After many days of deterioration in her condition, Prissy was diagnosed with incurable cancer. Gary and Kelley made the very difficult decision to end Prissy’s suffering. Prissy closed her eyes for the final time, in the arms of those that loved her more than they loved themselves, knowing she was the most special bulldog in the world.

Prissy, your legacy will live on well after all of us are gone.

Rest in peace sweet girl, your job here is done. Go now, run free with no pain, no difficulty breathing…we’ll see you again at the Bridge and fill you in on the rest of the story.